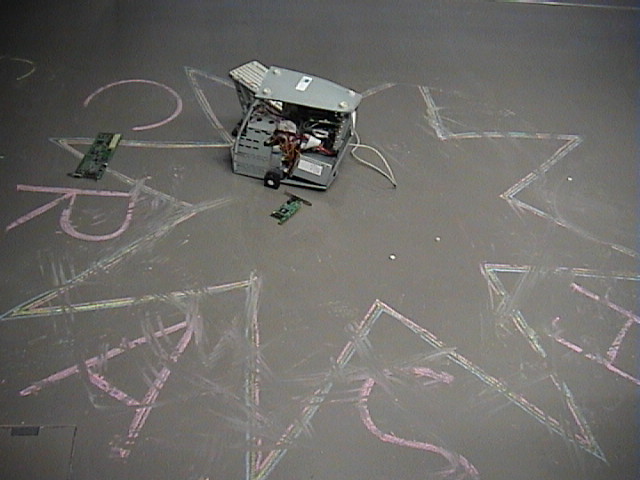 I have been invited for a second time to spend three weeks as a guest of Medien Kunstlabor at the Kunsthaus Graz, and to write something for the Kunstlabor dossier. Since my highest formal academic qualification is in Computer Science, you may think it presumptious of me to confront such a bold question as "What is Art" (and from the answer I give, inevitably also the question of what is not Art). Fortunately or otherwise, life has taken me far from quiet academic environment of my formation and thrown me deep into the social fabric of the city of Catania in Sicily, in the ferment of art students' shared houses, in the laboratories of "career" modern artists and in the receptions and art houses of gallerists and the rich. It was while living and working in an experimental theatre in the suburbs of Catania, seeing group after group prepare, rehearse and perform various original works, that I came to divide the "artists" I saw into two distinct categories.

It was clear that many of these people had an urgent need to comunicate some message for which words were useless. Words might accompany the action, but the created situation was without doubt the main carrier of whatever it was they were trying to express.  The result was usually unclear and ambiguous, but their search for a way of sharing their vision with others had the intensity of madness and the desperate inventiveness of someone trying to mouth words to another person from the other side of soundproof glass.
These tortured souls, having inside them something to say, would seek the necessary means to comunicate it in any way they could and since our theatre was little more than a large whitewashed (if architecturally interesting) room situated in one of the most frightening rough areas of the city, we had the good fortune that an unusually high proportion of the people who came to us were of this creative and luminously energetic type, prepared to make a show out of whatever means they could scrape together.

In the other category of theatre groups the motives were obviously the other way round. These people wanted the means involved in putting on a show, be it the money, the things or just the prestige, and had to put a show on to get them.  I am talking about groups where, typically, one person had succeeded in getting a project approved by some official funding body and, having taken or been promised money, had to put on a show to justify the public expense.  Any show.  Anything at all, so that no one could say that they had taken the money and done nothing.  They would spend money on large quantities of pointless materials to satisfy the article "expenses" in their budget (enormous lengths of rope and cloth seemed to be perennial favourites!) and programme weeks of rehearsal from a inflexible script that often featured people being tied up and beaten, fire, bowls of blood and other gaudy effects.
Instead of a relatively disorganised group of equals seeking a common goal that characterised the social organization of the former groups, here we usually had one person commanding and the others obeying on pain of being expelled from the group.  Instead of a happy, playful atmosphere producing joyful surprises, the air was heavy and pained, the people terribly serious and anxious and the few unfortunate creatives who tried naively to give their best in whatever lowly task had been assigned to them would inevitably end up being illtreated, their work insulted, and they often went unpaid despite the promises that had been made to them, as if their candid enthusiasm were a thing to be punished. In reality they had not had the wisdom to realise that they had ended up in the wrong kind of group.

Returning from these reminiscences to our theme, I am tempted to answer that art can be present or absent in any human activity: in the way a shop assistant wraps a package, in the way one cleans a room (do you also do the places where no one will ever look?), but here we must distinguish art from craft. Craft is ability coupled with care and attention in what one does, instead of reluctantly doing the minimum required to achieve an effect or to satisfy someone else's eye and thereby obtain a reward. Craft also contains a message for anyone who might happen to be watching, or who might observe the artefacts: not only the fact that if you do something you can derive joy from doing it well, but also a demonstration of one specific way of doing that particular thing.
In art, instead, the message, independent of the activity itself, is the only motivation and the choice of medium and artefact spring solely from the desire to express that message.  It may be the need to comunicate a vision or a new way of perceiving reality, it may be a comment on a topical situation that reveals the artist's view of the true nature despite all it appears or is claimed to be, or meta-art which comments on the concept of art itself, or which challenges what is and is not "permitted" as an art form. (Remember that not many years have passed since every abstract artist risked being asked "It's very nice, but what is it a picture *of*?")
Like true theatre, it is an attempt to comunicate a message for which words are useless: as one artist said when asked explain one of his pictures, "If I could have said it in words, I would not have needed to do it".

Let me try to tie these consideration to the position of medien.kunstlabor.  Inevitably, human nature being the same throughout the world, the same motivations repeat themselves here, but the stakes are higher.
On the one hand we have people whose fixed job at the Kunsthaus is no more than a source of security for them and their families, or of power and prestige in the more perverse minds.  They are to be found crouched in every European Art and Music Institute and in every University, and the amount of influence they exert on the artistic and academic activities of these centres is a measure of the level of corruption in the society of which they are a part.  I have no problem with them because their presence is inevitable.
On the other hand, apart from the money with which MKL can finance people, the high concentration of computer and networking equipment at the media laboratory, part of the server hosting project, represents an object of insatiable desire for any computer enthuisiast you care to mention.  I remember that when I was 12, and we are talking about the late 1970's, that the desire to be able to program one of the first desk-sized personal computers, even for a few minutes, compelled me to take the train week after week to the centre of London, 25 km away, together with a friend, on the offchance of being allowed to type in and run a program on one computer in a shop's display department.  I know the thirst, and so I understand it in others.
Medien Kunstlabor must be very careful, if it is to promote artists, to distinguish those humble souls who have a vision to comunicate, who most likely are not very technically able and who seek the means to do so through internet, from the technological vultures whose primary desire is to gain equipment, money and prestige and who simulate the appearance of artists in order to do so.
I don't criticise them for wanting money and things - the world is full of people who do far worse things than this to get their hands on money and things! - but their desire to possess that which is not theirs and their fear of losing it drives them to compete with the others people, to impede others in their work, and to insult and destroy other people's work where they are afraid that it may cast a shadow on their own glory.
----------------------------------
Footnote: While I was there, I made an installation, "Crash". The "artist" jaromil, also there, organized for it to be removed by the cleaners the day after, saying "It's just a pile of rubbish".
Posted by martinwguy at 02:57 No comments: